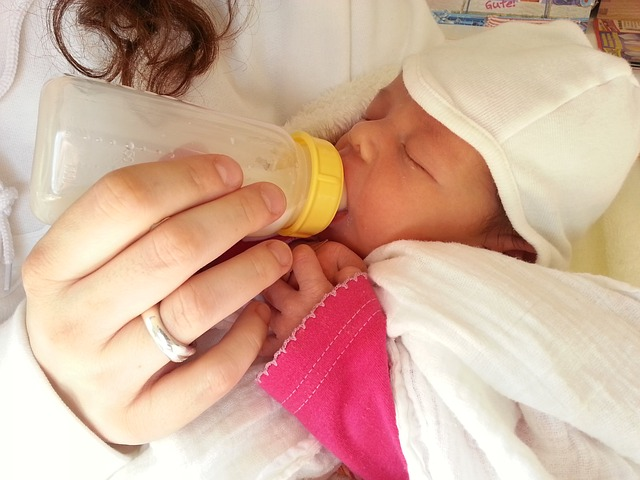 The Government of Canada states, "Our focus now is on the health of newborns and infants under 18 months.  Science tells us that exposure levels are below those that could cause health effects; however, due to the uncertainty raised in some studies relating to the potential effects of low levels of bisphenol A (BPA), the Government of Canada is taking action to enhance the protection of infants and young children.

Studies have shown the main sources of exposure for newborns and infants are from bisphenol A migrating from the lining of cans into liquid infant formula and from the polycarbonate baby bottles into the liquid inside following the addition of boiling water.  The Government of Canada will continue to ensure that levels of BPA in infant formula are kept at the lowest levels achievable by carefully reviewing pre-market submissions of infant formula and working with the food packaging industry.

The Government of Canada states they are moving forward with legislation to ban the importation, sale and advertising of polycarbonate baby bottles.  They will also be evaluating alternatives to BPA for infant formula can linings.

"The amount of Bisphenol A (BPA) exposure that may be associated with adverse health effects in humans is currently unknown.  From 2009 to 2011, BPA was detected in the urine of 95% of Canadians aged 3 to 79 years.  The average BPA concentration was 1.2 μg/L (micrograms per deciltre)," says Health Canada.

Current dietary exposure to BPA through food packaging use is not expected to pose a health risk to the general population because BPA is rapidly broken down in the body and excreted in urine, therefore BPA measured in urine is indicative of 'recent' BPA exposure.  Children aged 3 to 5 years and 6 to 11 years had the highest BPA levels with an average concentration of 1.4 μg/L (micrograms per deciltre), while adults aged 60 to 79 years had the lowest BPA levels (1.0 μg/L). BPA levels were the same for males and females of all age groups.

Canadian Health Measures Survey (CHMS) collected data during the period of 2009 – 2011, from a representative sample of Canadians (consenting respondents) aged 3 to 79 years at 18 collection sites across Canada.  Basic demographic and health information was collected during a household interview, followed by a series of direct physical measurements taken at a mobile examination centre.

In 2012 Canada, United States, Europe, China, South Africa and Malaysia officially banned BPA in the manufacture of baby bottles and cups because environmental groups and parents voiced their profound concerns that BPA was interfering with children's development.

Environment Canada and Health Canada.  Questions and Answers for Action on Bisphenol A Under the Chemicals Management Plan. 2010 Accessed February 28, 2013.

Winter Emergencies! How Prepared are You? Do You Have a Winter Survival Kit?...

Ontario – Most Expensive Childcare in Canada