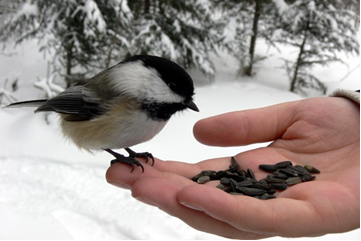 Flying to a nearby tree, you can watch chickadees hammer the seed on a branch to open it.

Chickadees need to eat a lot of food to sustain their energy and during the short winter days the rate of feeding is sped up.  Food that is not needed for immediate activity of flying around and foraging is stored as fat, which provides energy they need to survive through long, cold nights.  Sunflower seeds, peanuts and suet are offered at feeding stations during the winter months.

The Black-Capped Chickadee measures 12 to 15 cm (about 5 inches) from bill-tip to tail-tip, is greenish-grey with a white underside shading to a light brownish buff along its flanks and it has a long, dark-grey tail that resembles a handle.  A black cap is drawn over their sparkling eyes and covers their head from cone-like bill to the back of the neck.  Pure white cheek patches and a triangular black throat patch complete its most prominent features.

Because chickadees inhabit such a wide variety of climates and habitats, birds from different populations may vary somewhat in size and plumage.

Where Can You Find Black-Capped Chickadees?

The black-capped chickadee can be found from coast to coast in North America, from the northern half of the United States all the way to James Bay in the north, which is the southern edge of the Northwest Territories.

Chickadees can also be found as far west as the Yukon and the southern half of Alaska in the North.  During the winter, chickadees may wander outside of range, both to the north and south.

The chickadee makes at least 15 different calls to communicate with its flock mates and offspring.  The best known call is the “chickadee-dee-dee” that gives the bird its name.  Using this call, both male and female chickadees challenge intruders and send information about the location of food and predators to their partners, offspring, and members of their flock.

Male chickadees also sing a short ditty of two or three whistled notes - one higher and slightly longer, followed by one or two lower, shorter ones: “feee-bee or feee-bee-bee”.

Males may sing at any time of the year, but do so mostly in the early part of the nesting season, peaking during territory establishment, nest building and egg-laying.  Males sing sporadically during the day, but serenade their females with a dawn chorus that can last from 20 minutes to an hour.

During the fall and winter, black-capped chickadees live in loose flocks of 4 to 12 birds and each flock consists of mated pairs.  From October to March, the flock flits from tree to tree meandering through well-travelled forest paths at a rate of about half a kilometre an hour.  Chickadees keep in touch with each other by means of soft notes, "sit-sit", which is uttered at time intervals.

n the north, chickadees usually roost in dense evergreen groves where they are sheltered from wind and snow.  Other chickadees roost in the top branches of evergreens or low down in bushy, young spruces.  To keep warm, chickadees erect their soft, thick feathers to trap warm air close to their bodies, which serves as good insulation against the cold, wintery days.

What a Great Family Day Outing!

The next time you are planning a family day, why not research conservation areas in your vicinity and experience the joy of feeding birds – especially chickadees!  What a beautiful way for your family to connect with nature.  Seeing your children's eyes shine with awe and wonderment, will through the passing years, develop into fond memories of your time shared together.

Don't forget – bring black sunflower seeds, binoculars and a camera!  You can thank me later!

To obtain maps and locations of the best places to feed chickadees in Ontario, please click on Grand River Conservation Authority

All About Birds – The Cornell Lab – Black-capped Chickadees

This article was written by Veronika Bradley on December 8, 2012 for Children’s Health and Safety Association and edited and re-published for Diligencia Investigative Reporting – September 2020.

Diligencia Investigative Reporting - Your Child’s First Trip to the Dentist:  Do You Know What to Expect? 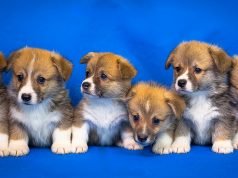 Pets Benefit People So Many Ways! 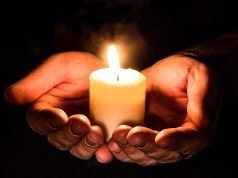 Within My Being, Hope Breathes