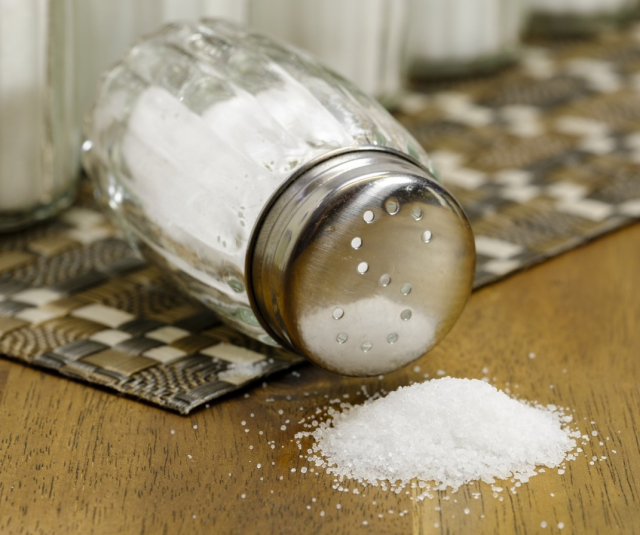 To encourage people to curb their sodium intake JoAnne Arcand, a University of Toronto dietician and postdoctoral fellow, together with researchers from the Ottawa Hospital Research Institute and the Institute for Clinical Evaluation Sciences created a 'salt calculator' (Project BigLife) that determines your approximate daily intake using a survey on your eating habits.  This salt calculator tool, which is accurate for

people from the age of four and older, also provides users with a detailed breakdown of where they are getting the most sodium in their daily meals.

JoAnne Arcand states that many people are surprised at how high their sodium intake is considering 75-80% of consumed sodium is hidden in processed foods such as sauces, canned vegetables, salad dressings, fast food restaurants and prepared meats.

On average, Canadian people consume 3,400 milligrams of sodium per day, which is more than double the 'adequate intake' level of 1500 milligrams recommended by Health Canada for anyone between the ages of nine and fifty.  A diet of high sodium foods is a major risk factor for hypertension and high blood pressure, which can lead to stroke and heart attack.  High sodium intake has also been linked to kidney disease, osteoporosis and stomach cancer.

For the many people who are unaware they are consuming high sodium levels JoAnne Arcand hopes her salt calculator will act as a wake up call that leads them to instil preventative measures to deter long-term negative health effects.  It is also her intent to debunk myths that commonly accompany sodium by showing people that there are several sources of sodium in their diet.

Children's Health and Safety Association has a 'Food Safety'

document that includes a segment on 'Sodium' (Page 2 - scroll down the page to find the heading 'Sodium') which includes:

OK Moms and Dads, are you ready to take the test?

The idea behind this 'salt calculator' is that you answer all of the questions honestly.  I'm hoping that you do.  It could prevent you and your children from experiencing future negative health effects and it will encourage and inspire you to modify your family's daily meals with healthier food choices.

WHO Appeals for Tuberculosis Treatment amid COVID-19 Pandemic