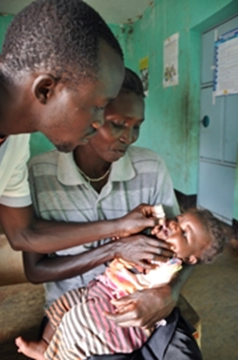 Written by Veronika Bradley, Editor for Children’s Health and Safety Association – May 11, 2014 and Republished by Diligencia Investigative Reporting – April 2019

An estimated one million children worldwide are infected with Tuberculosis every year – a disease that is preventable and curable.  However, what has researchers very concerned is that they discovered over 32,000 children who are suffering from a Multi-Drug Resistant Tuberculosis (MDR-TB).

Dr. Phillip Du Cros, a TB advisor for ‘Doctors Without Borders’ stated that dealing with MDR-TB is very difficult but dealing with an even stronger strain of the bacteria that causes Extensive Drug Resistant Tuberculosis (XDR-TB) is of a very urgent matter and poses a global threat.

Dr. Cros added that standard TB drugs do not work against the new strains of the disease. Treatment for MDR-TB could last for two years and patients could swallow 10,000 pills and have daily injections for eight months - but the treatment may still not work.

Presently there are about five to eight drugs used to treat resistant TB, depending on the regimen needed, and the two latest drugs available are actually the first new TB medications developed in 40 years.

Majority of the tuberculosis cases are in China, Russia and India and today it is South Africa’s leading cause of death in children.  The World Health Organization reports that 482,000 of South Africa's 50 million people contract TB every year and 505,803 people died of TB in 2011.

There are approximately 5.6 million people in South Africa living with HIV/AIDS, which is very worrisome to many health organizations because people living with AIDS are quite vulnerable to TB.

31,789 people in Mumbai were diagnosed with TB in 2013, of which 2,398 were children.  5% of all cases were drug resistant.  Babies as young as one year of age have been diagnosed with the disease.

The Republic of Moldova, a landlocked country in Eastern Europe located between Romania to its west and Ukraine to its north, east and south is one of the World Health Organization’s 18 high priority countries for Tuberculosis control and one of the world’s 27 countries with the most cases of MDR-TB.

Almost one third of people newly diagnosed with TB in the Republic of Moldova and two thirds of those returning for treatment have MDR-TB.

MDR-TB rapid diagnostic tools which can detect TB infection and antibiotic resistance in less than two hours, have been introduced in thirty district and municipal centres across the country since 2012.   One of the most crucial and beneficial factors for this new technology is that it speeds up the diagnosis process by cutting the lead time on lab results making it possible to enrol people in treatment right away - especially in high risk populations.

The transmission of Tuberculosis is mainly due to late diagnosis, poverty, poor living conditions, and lengthy hospital stays with inefficient infection control.

The number of children who are reported, diagnosed and treated for the disease is rising every year because only one in five people with the disease is receiving treatment - so the airborne disease is free to spread indiscriminately.

Tuberculosis is very difficult to diagnose in children because the TB bacteria is not confined in the lungs rather it spreads to other parts of the body including the brain and bone marrow. The conventional sputum test that provides a successful diagnosis in adults is not sensitive enough to pick up the disease in all children.

Adults can carry the bacterium in a latent form for many years before becoming ill but children that are infected become sick very rapidly, and have a greater risk of dying even before diagnosis.

Photos in this document sourced from World Vision – Tuberculosis

Diligencia Investigative Reporting - Measles:  How Many Children Have to Die to Prove a Point?

Does Your Child Suffer From Sleep Apnea?

Reduce Plastics from our Daily Lives – Here’s How!