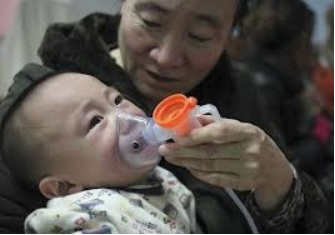 Situated in the eastern part of China's southern Guangdong Province, Dapu, a pastoral village with a population of 64,000, is enveloped by majestic mountains and clear, green flowing rivers.

Isolated from modern society, Dapu is renowned for its Hakka residential buildings that are nestled tidily over the valleys and interlaced by lush bamboo, green tea and banana trees.  Quaint ferryboats crossing the river would arrive at Hechun Dock - a classic Chinese landscape representing tradition, harmony and peace.

This idyllic lifestyle, where farmers made a good living selling rice, herbal medicines, bamboo chairs and freshly picked vegetables came to an end in 2008, when an aluminium fluoride facility spewed heavy plumes of smoke twenty-four hours a day over local farm fields polluting their crops and irrigation systems.

On the morning of June 9th, 2010, excavators bulldozed villager’s crops two weeks before harvest time.  The Miaoli county government expropriated 156 hectares of land that belonged to local residents for the construction of an industrial complex.

Tungsten, copper, cadmium, lead and zinc produced at smelting factories and chemical plants, set up by Dapu officials from 2003 to 2013, have created a toxic environment with cancer rates so high in Dapu as well as hundreds of similar towns throughout China, they are now commonly known as ‘cancer villages.’

“Industrialization has turned much of the Chinese countryside into an environmental disaster zone, threatening not only the food supply but the legitimacy of the regime itself,” says Josh Chin and Brian Spegele in an article called, “China’s Bad Earth” published in The Wall Street Journal.

Over 300 children were diagnosed with high levels of lead in their blood in Dapu.  Rather than remove the children from the environment and provide medical treatment for the severe cases, officials offered milk to the parents if they agreed to surrender their children’s ‘original’ blood test results.

To aggravate the situation to a more acrimonious and demeaning level, officials deceived countless parents into believing that if their children drank milk, it would flush out all the lead from their bodies and they would be cured.  The National Health and Family Planning Commission openly stated that this belief is widespread in China.

The National Health and Family Planning Commission and the U.S. Centers for Disease Control and Prevention (CDC) agree that the source of pollution must be eliminated, that better nutrition does not lower lead levels, and medical provisions should be provided to remove heavy metals from people with extreme levels of lead poisoning.

National data on lead levels in China do not exist but the Capital Institute of Pediatrics in Beijing conducted a survey in 15 cities between 2004 and 2008 and found 7.6% of those surveyed had lead levels above 100 micrograms per liter (ug/L) – China’s limit for safe lead exposure.

Li Keqiang, Premier of China, stated that environmental pollution has progressively become a source of social unrest and officials offering milk in lieu of medical records is a strong indication of the challenges China is facing.

Greenpeace, an environmental advocacy group, conducted a study a few months ago and found high levels of cadmium and lead in local rice samples – some as high as 22 times the national lead level limit.

High lead-levels in young children can affect their cognitive and behavioural development, cause learning disabilities, seizures and death in some cases. The effects of lead exposure are greatest in unborn children and those under five years of age.

Li Laiyin, a 64-year-old grandfather from Dapu broke into tears when he spoke of his two grandchildren who don’t have an appetite, can’t sleep – nor can they concentrate long enough to finish their homework.  They tested nearly five times the Chinese lead level limit two year ago.  He worries about their future.

China has a rampant pollution problem that is so bad two-thirds of the country’s wealthiest people have left or are planning to leave according to the 2013 Hurun Report completed by GroupM, a media firm.

Senior Executives from 170 countries have told the American Chamber of Commerce in Beijing that the smog was a very strong deterrent when considering transferring to China.

In the last two years, pollution has caused major health issues amongst its people as well as grounded thousands of flights at airports, closed down highways, and discouraged tourists - costing China about 9% of its gross national income.

Last November an eight-year-old girl, living in the Jiangsu Province of Eastern China, was the youngest person in China to be diagnosed with lung cancer caused by pollution according to Chinese officials.

Arden Pope, economics professor at Brigham Young University in Provo, Utah whose research into the effects of air pollution on human health and mortality has been instrumental in establishing federal air quality regulations, commented that children diagnosed with lung cancer are normally linked to genetics - not pollution.

In some industrialized areas of China, microscopic particles called PM2.5 have reached levels up to 40 times higher than the exposure level considered safe by the World Health Organization (WHO).

While there are many types of carcinogens emitted with industrial pollution, our respiratory systems filter out the larger particles from air pollution.  However, PM2.5, normally caused by power plants, burning coal and wood, gasoline and diesel, has very fine particles that remain suspended in the air for weeks.

“These tiny combustion particles are small enough to penetrate the lungs, and they’re made up of all sorts of nasty particles,” says Hope.

There are deep-rooted and valid worries about the agricultural production in China.  New research suggested that if the smog persists, Chinese agriculture will suffer conditions "somewhat similar to a nuclear winter" commented He Dongxian, Associate Professor at China Agricultural University's College of Water Resources and Civil Engineering.

WHO states that air pollution causes cardiovascular disease and the higher the air pollution, the greater the risk.

In 2009, China burned nearly 50% of the world's coal, and coal accounts for nearly 70% of China's energy.  Cities in China’s Yangtze River Delta, Pearl River Delta, and Beijing-Tianjin-Hebei region suffered over 100 hazy days a year with PM2.5 concentration 2 to 4 times above WHO’s guideline.

National Geographic states in an article dated July 2013 that, “Life expectancy in northern China was 5.5 years shorter than in southern China in the 1990s, and a health risk disparity lingers today, a difference almost entirely due to heart and lung disease related to air pollution from the burning of coal, a new study shows.”

"There's a general feeling that government officials know the problem is really bad, and if they disclose it, then the public outrage will get ahead of the ability of the state to do something about it," says Alex Wang, an expert in Chinese environmental law at the UCLA School of Law. – Excerpt from the article “China’s Bad Earth” published in July 2013 in The Wall Street Journal.

Recently, the Chinese government passed legislation to reinforce environmental protection laws and reduce widespread pollution with clean energy solutions.  China has set a target of cutting emissions in key industries by 30% by the end of 2017.

In 2013, the Chinese government stated it would expose their most polluted cities as well as force factories and plants to disclose environmental standards publicly, in an attempt to make them accountable.

WHO: Outdoor air pollution a leading environmental cause of cancer deaths

Facts and Details about China’s Pollution

This story is part of a special series that explores energy issues. For more information, visit The Great Energy Challenge.

Flip-Flops: More Cause for Concern & Caution than Convenience